Charged with a crime? Looking at a potential trial? If you are, it’s important to acquaint yourself with the bail setting process—how the court determines bail.

But first, it’s important to learn what bail is. Let’s begin.

After an arrest, the accused person is taken to court to determine the bail amount.

A judge sets a bail amount to ensure that the accused person appears for the future court date instead of fleeing. The courts follow a standardized process when it comes to setting bails.

The person posting bail doesn’t necessarily have to be a family member or friend of the accused person.

In fact, anyone who’s over 18 years old and has the monetary resources can post bail on the accused’s behalf.

Moreover, a bail bond agent can arrange to have their bail posted as well, either by submission of cash or collateral.

Can bail be denied?

There are many instances where a judge may deny bail altogether. For example, if the alleged crime is a serious offense such as murder, the judge may not grant bail.

Similarly, if the accused person has a history of criminal activity or a record of fleeing, it’s likely that a judge will dismiss the bail request. 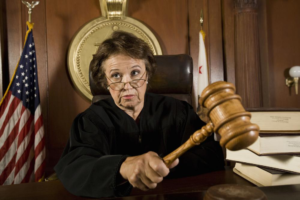 The severity of the case

The judge evaluates the severity of the offense when determining the bail amount. Primarily, public safety and the seriousness of the issue are taken into consideration.

A low bail amount is set for crimes that fall under misdemeanors—such as disorderly conduct, traffic violations, or vandalism.

However, in cases involving violent crimes—such as sexual assault or murder—the amount of bail is set at a much higher amount.

Prior record of the accused person

The accused individual’s prior criminal history is also evaluated during the bail setting process. A history of poor behavior or criminal activity can result in a high bail amount.

On the other hand, if a person has no criminal record or history of violations, they are expected to continue the same behavior, thus, the amount of bail is set at a much lower amount.

The probability of the accused person appearing in court for trial is also determined by the court when setting the bail amount.

An accused person’s ties with the community, employment conditions, and family dependents, among several other factors, are taken into consideration to assess the likelihood of them jumping bail.

For instance, if a person commits a crime while outside their home city, it’s possible that they’ll flee to their hometown to avoid future court dates.

The role of technology

Many courts rely on a computer programs to factor in the aforementioned points and determine the bail amount.

Though the software may come up with a certain amount, the final discretion for the amount of bail resides with the judge.